You must consider all the total of the Grace family experiences: Purchased the brewery in 1897, only to see a fire burn it down a few months later; the brewery’s survival of Prohibition; the death of Frank P in 1930; the closure from 1953-1958; the deaths of Frank, Jim, Bill and then Jack that left Tom alone at the helm. The family successfully fought through all these setbacks but finally Tom had to sell. He could not compete with the major brewers who were dropping prices and taking market share from regional breweries. Additionally, strong unions and, as indicated earlier, changes in beer tastes to the lighter, less hoppy beer were another negative factor. You may remember the premium college kids put on Coors beer in the early 1960’s before that beer was available in California. Students drove to Golden, Colorado and bought enough beer to make a small fortune when they returned to California. Why? Because it wasn’t available locally and scarcity was the name of the game -and it was a distinctly lighter beer. As mentioned, World War II and the emergence of the female beer drinker hastened the trend to less full-bodied beers and higher alcohol beers. Plus, you could drink more of the lighter beers. This fact was not lost on the major brewers

Tom continued to increase efffiency and added equipment in the struggle to compete. Grace Bros survived as long as it did survived because it brewed private labels for Safeway, Purity, Lucky and other supermarkets, and for some of the larger liquor stores. All the beer was the same except Bull Dog Ale and Stout and GB Bock beer. (A bock beer is hoppier and caramelized malt is added for color.) The various cans were different in appearance, which caused much confusion and not a little humor around town. Still, some local folks had their favorite beers and believed Grace Bros. brewed many different ones. I remember being told by an older friend (older being probably 22) when I was in high school that Brewers Best was the best beer Grace Brothers made. I knew it was all the same so, wondering what to say to my friend, I asked Uncle Tom what to say. He said, “ Tell him that he is a great judge of beer”. Lesson learned!

Bull Dog Malt products supplied, according to John Burton’s figures, 25% of the sales and Graces Bros. kept us afloat for a while. I asked brother Jim once if he remembered tasting Bull Dog, but he doesn’t. However, with the high alcohol content that is possible. The period from 1958-1966 was a time of pure struggle to survive as far as I can tell. With Tom the last of the Grace boys, he had the responsibility for large and extended family. Bill Grace’s second wife, Maryann, sold her share of Uncle Bill’s estate, and that produced additional financial pressure since there was now ownership outside the family. I am sure they wanted a return on their investment. I believe they paid $10,000 for Maryann’s share.

The history of the Grace family is a history full of business adventures and community involvement and pride. The athletic achievements of the five Grace Boys was an impressive record. As is probably obvious, I have always been proud to be a member of this family and continue to be so. They were all good people who treated their fellow Santa Rosans with respect and I believe that respect was mutual. 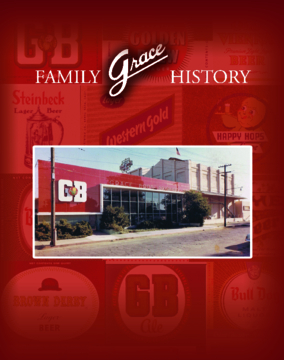